Home Health Vitamin K1 and Vitamin K2 - What is the Difference?
Health

Vitamin K1 and Vitamin K2 – What is the Difference? 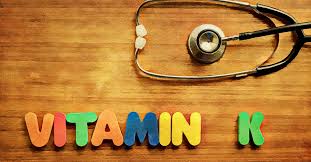 Vitamin K1 and K2 is well known for its fundamental role in blood clotting. But in reality the name “Vitamin K”, encloses a group of several vitamins that provide health benefits, far beyond helping in blood clotting. In this article, you will learn the differences between the two main forms of vitamin K found in the foods you eat: vitamin K1 and vitamin K2. You will also learn the main foods that are good sources of these vitamins, and the health benefits you will get by incorporating them into your diet.

What is Vitamin K?

Vitamin K is a group of fat-soluble vitamins that share similar chemical structures. Vitamin K was discovered accidentally between 1920 and 1930, in the attempt to control, through restricted diets, a type of excessive bleeding in animals. Although there are several different types of vitamin K, the two most frequently found in the foods we eat are vitamin K1 and vitamin K2. Vitamin K1, also called phylloquinone, is found mainly in plant foods such as green leafy vegetables. These types of vegetables represent about 75-90% of all vitamin K consumed by people. Vitamin K2 is found in fermented foods and products of animal origin, it is also produced by intestinal bacteria. It has several subtypes called menaquinones (MKs), which are named by the length of their side chain. They range from MK-4 to MK-13.

Summary: Vitamin K refers to a group of vitamins that share a similar chemical structure. The two main forms found in the human diet are: vitamin K1 and vitamin K2.

The main source of vitamin K1 is the green leafy vegetable group. Listed below are several foods that are high in vitamin K1. Each value represents the amount of vitamin K1 per 1 cup of cooked vegetables.

Summary: Vitamin K1 is the main type of vitamin K in regular diets. It is most commonly found in green leafy vegetables.

Food sources rich in vitamin K2 depend on the subtype of that vitamin. In the case of MK-4, it is a subtype of vitamin K2 found in some animal products, and it is also the only form of vitamin K2 that is not produced by beneficial intestinal bacteria . Among the main sources of MK-4 we have: chicken meat, egg yolks and butter . On the other hand, vitamin K12 subtypes ranging from MK-5 to MK-13 are forms of vitamin K2 with longer side chains.

“They are produced by beneficial intestinal bacteria and are often found in fermented foods”.

The Natto is a popular Japanese dish made from fermented soybeans, particularly it is high in MK-7. Some hard and soft cheeses are also excellent sources of vitamin K2, in the form of MK-8 and MK-9. In addition, a recent study found that several pork products contain vitamin K2 such as MK-10 and MK-11. Below is a list of foods high in vitamin K2, for every 3.5 ounces (100 grams) we have:

Summary: Sources of vitamin K2 vary by subtype, although they include fermented foods and certain animal products.

Differences Between K1 and K2 in the Body:

The main function of all types of vitamin K is to activate proteins that play an important role in blood clotting, heart health and bone health. However, because the process of absorption and transport of vitamins to tissues throughout the body is not always constant and differs, vitamin K1 and vitamin K2 could have different health effects. Usually, the vitamin K1 found in vegetables is poorly absorbed by the body. One study estimated that the body actually absorbs less than 10% of the vitamin K1 found in vegetables. As for vitamin K2 more studies are needed. However, experts suggest that vitamin K2 is better absorbed than vitamin K1, as it is often found in foods that contain fat. This is because vitamin K is a fat-soluble or fat-soluble vitamin. Fat-soluble vitamins are much better absorbed when consumed with dietary fats. In addition, the long side chain of vitamin K2 allows it to circulate in the blood for longer than vitamin K1. When vitamin K1 can remain in the blood for several hours, some forms of vitamin K2 can remain in the blood for days. Some researchers suggest that vitamin K2 is better absorbed by the body because its circulation time in the blood is much longer. Vitamin K1 is mainly transported and used by the liver. These differences are important to take into account to identify the different roles that vitamin K1 and K2 play in the body. In the following sections the topic will be expanded.

Summary: Differences in the absorption and transport of vitamin K1 and K2 in the body can lead to differences in its effects on your health.

The Benefits of Vitamin K1 and K2 for Health:

Studies investigating the benefits of vitamin K for health have suggested that both vitamin K1 and vitamin K2 can benefit blood clotting, bone health and heart health.

Several proteins involved in blood clotting depend on vitamin K to fulfill its function. Blood clotting may sound like a bad idea, and sometimes it is. However, blood clotting is important, without it, you could bleed excessively and end up dying, even if the wound is small. Some people have blood clotting disorders and take a medicine called warfarin to prevent blood from clotting too easily. People who take this medication should maintain a constant intake of vitamin K due to the powerful effects of warfarin on blood clotting. Although most of the attention in this area is focused on vitamin K1 food sources, it is also important to control vitamin K2 intake. One study showed that a single serving of natto, rich in vitamin K2, altered blood clotting measures for up to four days. This was a much greater effect compared to foods rich in vitamin K1. Therefore, it is important to control foods rich in both vitamin K1 and vitamin K2 and more if the person is under any anticoagulant medication such as warfarin.

In addition to blood clotting and bone health, vitamin K also seems to play an important role in preventing heart disease. Vitamin K activates a protein that helps prevent calcium deposition in the arteries. These calcium deposits contribute to the development of plaques, so it is not surprising that it is a strong indicator of heart disease. Several observational studies have suggested that vitamin K2 is more efficient than vitamin K1 in reducing these calcium deposits and in the risks of heart disease. However, better quality controlled studies have shown that vitamin K1 and vitamin K2 supplements (specifically MK-7) improve in several measures of heart health. However, more studies are needed to prove the vitamin K supplement that actually causes these improvements in heart health. In addition, more research is needed to determine if vitamin K2 is actually better than vitamin K1 for heart health.

Summary: Vitamin K1 and vitamin K2 are important for blood clotting, bone health and possibly heart health. More research is needed to clarify whether vitamin K2 is better than vitamin K1 in performing these functions.

Vitamin K deficiency is rare in healthy adults. It usually only occurs in people with severe malnutrition or due to disorders in the absorption of said vitamin, and sometimes in people taking the drug warfarin. One of the symptoms of vitamin K deficiency is that the bleeding is excessive and cannot be stopped easily, although this could also be caused by other things and should be evaluated by a doctor. In addition, it may also be the case in which the person is not deficient in vitamin K, but if he is not receiving enough vitamin K he may be prone to heart disease and bone disorders such as osteoporosis. For this reason, it is important that you get the right amount of vitamin K that the body needs.

Summary: True vitamin K deficiency is characterized by excessive bleeding and is rare in adults. However, just because the person does not have a deficiency does not mean they are getting enough vitamin K for optimal health.

How to Get Enough Vitamin K?

The recommended intake of vitamin K is based only on vitamin K1 and is set at 90 mcg / day for adult women and 120 mcg / day for adult men. You can easily achieve the recommended intake by adding a cup of spinach to an omelet or salad, you can also try adding 1/2 cup of broccoli or Brussels sprouts as a complement to dinner. In addition, consuming these foods accompanied by a healthy source of fat such as egg yolks or olive oil will help the body absorb vitamin K more efficiently. There is currently no recommendation on the amount of vitamin K2 that should be consumed. It is best to try to incorporate a variety of foods rich in vitamin K2 in the diet, taking into account not an excessive intake of food of animal origin.

Below are Some Tips on How to Carry Out a Recommended Intake of Vitamin K.

Both vitamin K1 and vitamin K2 are also available as a supplement and are often consumed in large doses. Although no history of toxicity is known, more research is needed before giving specific recommendations for supplements.

Summary: It is best to incorporate a variety of food sources of both vitamin K1 and vitamin K2 into your diet to get the health benefits that these vitamins offer.

Vitamin K1 is found mainly in green leafy vegetables, while vitamin K2 is more abundant in fermented foods and some animal products. Vitamin K2 can be better absorbed by the body and some subtypes may remain in the blood for longer, compared to vitamin K1. These two points can make K1 and K2 have different effects on your health. Vitamin K probably plays an important role in blood clotting and improves heart and bone health. Some research suggests that vitamin K2 may be superior to vitamin K1 in some of these functions, but more research is needed to confirm this. For optimal health, it is important to integrate foods rich in both vitamin K1 and vitamin K2. Trying to include a green vegetable daily and incorporate fermented foods and animal products in the diet is a good idea to get enough vitamins K.