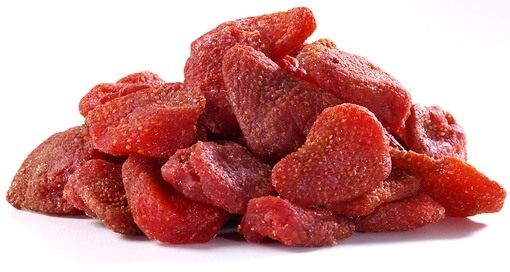 What are Dehydrated Fruits?

Dehydrated or dried fruits are fruits that have been extracted most of their water content through certain drying or dehydration techniques. They can be dried naturally in the sun or special dryers or dehydrating devices can be used. Apparently, the first indications of the consumption of dehydrated fruits date back several thousand years ago, in Mesopotamia, where numerous dehydrated fruits were already used in many recipes. By not containing water, dehydrated fruits greatly reduce their size and become a nutrient-rich hypercaloric snack. In addition, thanks to the dehydration process, these fruits can be kept in perfect condition for much longer than a piece of fresh fruit. In general, all varieties of fruits can be dehydrated, but the most consumed are:

These examples of fruits are usually dried in a 100% natural way, that is, in the sun or through dryers, and have no additives, so they are practically as healthy as fresh fruit and are called “traditional dehydrated fruits”. However, other types of fruits, such as cherries, blue or red cranberries or strawberries, among others, are usually soaked in sugar or derivatives before drying. These fruits dehydrated with sugar are called “dried candied or candied fruits” and, due to their high added sugar content, they are a much less healthy snack. That said; always choose the least processed versions of dehydrated fruits, that is, traditional. In other words, those whose ingredient list only includes fruit and not any other name that refers to some type of added sugar.

Dried or dehydrated fruits maintain the same nutritional value as a piece of fresh fruit, but without the water content. However, due to their small size, they contain almost 4 times more the amount of vitamins and minerals than the piece of fresh fruit. Remember that you always have to choose traditional dehydrated fruits, since they do not contain added sugars or other substances that alter their nutritional value. Nor do they have fat and are low in sodium. Also, dehydrated fruits are especially rich in fiber and potassium and thanks to their high content of antioxidants and other plant compounds offer various health benefits. On the other hand, dehydrated fruits also tend to contain significant amounts of folic acid (vitamin B9), which participates in the creation of new cells and is essential during pregnancy, since it can prevent congenital defects in the baby. However, the vitamin C content of dehydrated fruits is considerably lower than that of their fresh counterparts.

As I have already mentioned, dehydrated fruits are a food with a high concentration of nutrients and numerous plant compounds, mainly antioxidants. Both characteristics give dehydrated fruits a series of benefits and healthy properties that have been confirmed by science. Let’s look in more detail at these benefits…

1. Reduce the Risk of Cancer:

Two of the risk factors for cancer, oxidative stress and chronic inflammation, can be greatly reduced by eating dehydrated fruit. Thanks to its high content of antioxidant substances, mostly polyphenols, vitamins and minerals, dehydrated fruits have important antioxidant and anti-inflammatory properties. Also, experts have confirmed that the bioactive compounds present in dehydrated fruit, such as anthocyanins, acetogenins, catechins, coumarins, phenolic acids … make this snack a promising method of cancer chemoprevention.

It is a scientific fact more than confirmed that regular consumption of fruit prevents the risk of heart disease due to several mechanisms:

And … why wouldn’t the same thing happen with dehydrated fruits? I have already commented that the nutritional value of fresh fruit is maintained in dehydrated fruit and even increases the concentration of nutrients and antioxidants.

“The high potassium content of dehydrated fruits, such as prunes or raisins, helps reduce the risk of heart disease by regulating the level of blood pressure”.

In one study, the consumption of raisins positively affected cholesterol metabolism and inflammation markers, which resulted in a remarkable protection against cardiovascular diseases

Dehydrated fruits are a very good source of fiber, a non-digestible carbohydrate essential for the body. A diet rich in fiber has several essential benefits for your health. On the one hand, fiber-rich foods improve intestinal transit by preventing constipation, contribute to lower cholesterol levels, favor colon microflora and reduce glucose and insulin. On the other hand, some types of fiber also help reduce appetite and favor weight loss.

4. They are Suitable for Diabetic People:

In other words, the consumption of dehydrated fruits, for example, raisins, helps lower blood glucose levels and prevents the onset of diabetes.

5. Strengthen and Protect Bones Against Disease:

It has been shown that prunes can reduce bone loss caused by certain bone diseases such as osteoporosis. There are studies in both animals and humans that prove that the consumption of prunes not only helps prevent bone loss but also reverses it. In addition, dried fruits tend to have large amounts of nutrients involved in bone health, such as calcium, magnesium, boron and vitamin K.

Pregnant women need extra nutrients during this important stage of their lives. It is for this reason that regular intake of dehydrated fruits, with a high concentration of nutrients, can help them meet the daily needs that your body requires. But that is not all… According to various studies, eating about 6 dates a day reduces the need to induce or stimulate labor and promotes dilation of the cervix.

Do Dehydrated Fruits Have Any Negative Health Effects?

The first drawback we find when taking dehydrated fruits is their high sugar content. By weight and size, a dehydrated fruit has a lot of sugar and calories, hence it is necessary to moderate the consumption of this food. Catch out! Being so sweet and so “small”, it is very easy to abuse its consumption and remember that excess fructose is not good at all. For this simple reason, it is advisable to avoid the consumption of candied or candied dehydrated fruits, since these contain even more sugar from added sugars. In addition, some dehydrated fruits may also contain sulphites , substances that are added to preserve the color of the fruit and that can cause certain reactions in some people. If you want to avoid sulphites, don’t buy colorful dried fruits, even if they seem more attractive. The traditional and natural dehydrated fruit loses the real color of the fresh fruit, but this does not mean that it is in poor condition, but quite the opposite: it only has one ingredient, the fruit.

Eating traditional dehydrated fruits (without added sugars) is a good way to meet nutrient needs. However, these should be consumed in small amounts, as they are also rich in calories and fructose.