The benefits of beet for the body is undoubtedly a great alternative to implement in our diet, beet is a plant root whose color is red and violet and paints everything it touches. Its tender meat and delicately sweet taste make it a popular vegetable. In recent years, we have rediscovered white or yellow beet varieties, but none has reversed the popularity of reds.

Beet is a subspecies of plants of the Amaranthaceae family and is cultivated for its fleshy roots, and is used as a vegetable. There are three varieties of beet: yellow, white and red (the most consumed). Beet leaves can be eaten raw or cooked, such as spinach. They are particularly rich in vitamins and minerals. 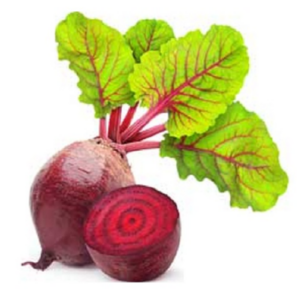 The history of beet dates back to ancient times and the first signs of its cultivation were about 4,000 years ago in the Mediterranean. From there, they were probably transported to Babylon and in the ninth century they had found their way to Chinese culture and cuisine. For some time they have been associated with the issue of sexuality and have been used as aphrodisiacs for many years. Beets are often added as an ingredient in salads, soups and desserts and are also used as a natural color. Although beets are available year-round, they are still considered seasonal vegetables. In addition to being used as a true food product, beets are also valuable as a source of sucrose, which makes them a viable substitute for tropical sugarcane. Therefore, they are often used to make refined sugar.

Benefits of Beet for Health:

Beet benefits for the body contain a high quality of vitamin C, while its leaves are a source of vitamin A. They are also sources of fiber, folic acid and antioxidants. Beet juice, meanwhile, rich in nitrates, which would reduce blood pressure and the fight against hypertension. Beet has a source of antioxidant power. Regular consumption contributes to intestinal well-being and the strengthening of the immune system. It also improves relieving headaches. Studies have recently shown that beets can reduce bad cholesterol levels and increase good cholesterol levels in the body.

Beet is a vegetable rich in carbohydrates, proteins, dietary fiber and also contains phosphorus, potassium and vitamin B9. It contains betalains, which are antioxidants, but also other forms of antioxidants, namely flavonoids, phenolic compounds, zeaxanthin and lutein. In addition to vitamin B9, there is vitamin K, vitamin B2, vitamin A and, in smaller amounts, vitamins B1, B5, B6, C and E. In addition, beets contain iron, copper, magnesium, manganese, but also some calcium.

Beets are generally well tolerated and have no particular contraindications, except for people who are prone to developing kidney stones and those who suffer from irritable bowel syndrome. Some of the negative effects of beet are the following:

It is full of benefits with its thick source of iron and folic acid, excellent for pregnant women and special diets, that is, vegans and vegetarians. Folic acid is essential for the healthy development of the fetus! During your pregnancy, it is recommended to offer a small beet cure so that the baby grows well. In short, beets revitalize you and have excellent nutritional value. In addition, with its beta-carotene content, it guarantees a good diet.

It Helps to Regenerate:

One of the significant virtues of beet is its ability to clean the blood. Its red color makes it an ally of blood cells, thanks to the iron it contains and which allows the regeneration of blood.

“It helps to promote oxygen supply in the body. As a result, it improves blood circulation by dissolving inorganic calcium deposits!”

Thanks to its nitrate content, which is transformed by the chemical action of the body into nitric oxide, beets have the virtue of lowering blood pressure. According to a scientific study, patients who consumed 120 ml of beet juice found a drop in their blood pressure of 10 points in less than 4 hours. So to keep fit and make the body work, it is advisable to use beets on the menu, for example, in salads!

But that is not your only interest for the body. It is detoxified due to its betacyanine content that allows the elimination of dangerous toxins from the body. In short, beets protect and preserve the liver, purifying and avoiding overload.

Excellent ally of detoxification, and cell regeneration, beets help daily to maintain shape preventing cancer cell development. Hence the interest to incorporate regularly in meals.  It was in 1950 when the Hungarian doctor Dr. Alexander Ferenczi used beet juice to treat cancer. Therefore, you can regularly consume some beet juice in the morning for breakfast.

Like onions, beets play a role in controlling your cholesterol. Above all, it helps maintain a balance, especially if the person tends to eat prepared foods, high in salt and saturated fats. In fact, beet has this therapeutic property to reduce the rate of bad cholesterol, responsible for cardiovascular disorders and increase that of good cholesterol, essential for the protection and maintenance of the arteries!

Daily life does not forgive and day to day raises levels of anxiety and stress, in fact, beets are good for anxious people, thanks to their high concentration of antioxidants. This tuber has the advantage of protecting from diseases and giving a feeling of well-being!

People prone to disease, and that their immune system is fighting to fight bacteria, it is advisable to consume beets! In fact, they have the benefit of stimulating and strengthening the immune system. In short, it allows to fight colds, flu and other diseases,

Beet contains a large amount of iron; the bright color of this vegetable is due to the presence of iron. Your body absorbs this substance quite easily. This is something that happens less well with other vegetables. Beets also help the body form hemoglobin. This protein in the blood provides oxygen and nutrients to other parts of the body. People with anemia or with heavy periods may have a deficiency of this mineral. Eating beets regularly can help relieve your problems.

Beet also contains a mineral called selenium. This substance is very significant for the body. As is known, calcium is essential for bones and teeth. You just have to consume a cup of beet juice every day. This will help fight conditions such as osteoporosis and fragile bones.

Rise the Levels of Energy:

Studies have shown that beets make muscles more efficient, which improves endurance. One of these studies was carried out among men 19 to 38 years of age who had to cycle on exercise bikes. By drinking about half a liter of beet juice per day, they could complete a sixteen percent more cycle without running out. And again this is due to nitrates. Scientists believe that the nitrates in red beets also help improve blood flow and signaling of cells and hormones. All this plays a role in increasing the energy level.

This is one of the least known benefits of beets! and yet it would be a mistake to deprive ourselves of it, beets have aphrodisiac benefits. In ancient times, the Romans used it for this purpose, because it improves vigor and sexual performances. There is no need to invest in oysters or ginger. Beet improves sexual activity by releasing nitric oxide that promotes blood circulation in the penis. Its boron content, a type of chemical compound causes an increase in libido and fertility.

How should Beets be Eaten?

You can eat red beets in salads or cooked. However, more properties and benefits of beets are preserved when consumed raw. Raw beets can be grated and seasoned with a dressing of a little oil and lemon juice.

How is Beets Cooked?

Simply put in boiling water with salt without peeling them. This way they don’t lose color or taste. They must cook for half an hour. Roasted beets can also be prepared. Beets are placed in a preheated oven and allowed to cook until soft. This ensures that they retain almost all favorable properties.